What it is: The Carpal Tunnel is the passage in the wrist created by bones on three sides and ligament on the fourth. Through this tiny space, nine tendons pass, as well as the median nerve. It stands to reason that any inflammation of any sort in the carpal tunnel will cause the median nerve to be compressed, thus resulting in carpal tunnel syndrome. The median nerve goes on to the thumb, forefinger, middle finger and half of the ring finger. This is the reason for the burning, tingling feelings and for the numbness and the pain.

Important Facts: The wrist is the slimmest part of the human body. Slim wrists have been considered a sign of beauty for 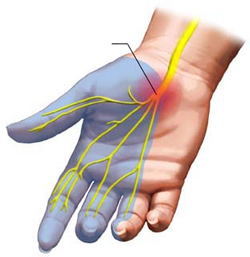 century’s, but people with smaller wrists, it is now known, are at higher risk for carpal tunnel syndrome.

The carpals are the very small bones you feel when you touch your wrist. In the wrist is the carpal tunnel, which is enclosed by the carpals on three sides, and on the fourth side, by a transverse carpal ligament. Within this narrow space, is not only the median nerve, but also nine flexor tendons. These tendons help you bend your wrist and fingers. As you can imagine, it’s a pretty tight squeeze. If for some reason the carpal tunnel is too small, or if the tendons within the tunnel become larger, your median nerve will be compressed equaling carpal tunnel syndrome.

Treatment Duration: Some patients have mild problems and can be fixed in 1-4 weeks; others take longer.

Do’s/Don’ts: Avoid Repetitive Strain Injuries while working at the computer. The best thing you can do is make sure you take adequate breaks. A break every twenty minutes can do wonders. This is especially important if you have any tingling or pins and needles sensation in your palm, because these are the first signs of Carpal Tunnel Syndrome. There are specific stretches to do during these breaks: The first stretch is called the Prayer Stretch. Simple start with your hands in a prayer position and slowly as tolerated bring palms down and hold for 10 seconds, 3x a day.

The second stretch is wrist extension. It is holding your arm out straight and slowly bringing your palm back  with the opposite hand as tolerated for a 10 second hold, 3x a day.

One of the most effective is the median nerve glide, which involves gentle bending and straightening of the fingers without bending or straightening of the wrist. This may help because it moves the median nerve and tendons that go through the carpal tunnel. This helps to relieve swelling and some of the pressure on the nerves because it pumps out fluid from the carpal tunnel.

Statistics: “Only 23% of all Carpal Tunnel Syndrome patients were able to return to their previous professions following surgery.” Source: NIOSH

Learn More at Kit-Therapy.com/Stretch   Need a gift for your Valentine? This one gives … END_OF_DOCUMENT_TOKEN_TO_BE_REPLACED

Vertigo – Dizziness Vertigo is a condition in which you feel off-balance and dizzy, as if you … END_OF_DOCUMENT_TOKEN_TO_BE_REPLACED

What is it: The Carpel Tunnel is the passage in the wrist created by bones on three sides and … END_OF_DOCUMENT_TOKEN_TO_BE_REPLACED

What is it? Parkinson's disease is a brain disorder that causes a gradual loss of muscle control. … END_OF_DOCUMENT_TOKEN_TO_BE_REPLACED

1) What To Wear You’ll need to expose the body part that is effected (knee, shoulder, back, etc.) Loose fitting apparel such as sweats and t-shirt are ideal, otherwise you may have to use a gown. 2) What To Expect  Be prepared to undergo a … END_OF_DOCUMENT_TOKEN_TO_BE_REPLACED